The Liars are the main characters of the series. Formed by Alison DiLaurentis, the Liars consist of Aria Montgomery, Spencer Hastings, Emily Fields, and Hanna Marin.

Welcome to the Dollhouse

"A" kidnaps the four Liars and brings them to her dollhouse, where she is keeping an alive Mona and forcing her to pretend to be Ali. Spencer learns of "A's" apparent name, Charles, and tells the other girls, who then set "A" up. At the fake prom "A" forces them to make, the girls call out for Charles. When "A" finally shows herself, they shut down the power and run. But Spencer stops by Charlotte's vault room first and sees a video of Jessica DiLaurentis with a young Jason, Ali and Charles. At this point, "A" sneaks up behind Spencer but is gone as soon as Mona enters the room. The Liars escape outside but find themselves surrounded by an electrical fence. 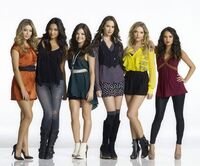 Add a photo to this gallery
Retrieved from "https://prettylittleliarss.fandom.com/wiki/The_Liars?oldid=22979"
Community content is available under CC-BY-SA unless otherwise noted.