After the near-death experience at the Thornhill Lodge, the Liars are hunting down Red Coat, trying to figure out if she actually is Alison DiLaurentis. The Liars now have a new ally: Mona, having been kicked off of the A-Team with Spencer and Toby and becoming "A's" newest victim. Meanwhile, Toby is tormented by "A" about his mother's death, which occurred at Radley Sanitarium. Toby and Caleb team up to track Red Coat down and are told that the plane she flew in on was rented by CeCe Drake. The Liars now suspect that CeCe may be Red Coat after all. During this time, Red Coat begins living under the DiLaurentis home. The Liars go to a town called Ravenswood to track down Red Coat, where Emily ends up being kidnapped by her and locked in a coffin on a sawmill. The girls see Red Coat heading to the Sawmill and chase her inside, where she actually stops the saw. At this point, another Red Coat, this one masked, shows up the scene. Aria chases her down and kicks off her mask to reveal CeCe Drake, while the other one leads Spencer to a lair, which Spencer and the girls believe belongs to "A". The Liars discover that the owner of the lair is a male and was paying CeCe, therefore leading them to conclude that CeCe was a decoy hired by a male "A". The Lair is revealed to belong to Ezra Fitz. The Liars find Alison in Ravenswood, alive and well, where she is revealed as the other Red Coat. She tells them that she wants to come home but can't because someone is after. Spencer eventually begins to believe that she is referring to Ezra, leading to a confrontation between him and Aria, where he reveals that he was in a relationship with Alison, but isn't "A". Instead, he is a writing a true crime novel about Alison, trying to solve her murder. He points the Liars towards a new suspect: Jessica DiLaurentis. With evidence pointing to her, the Liars suspect that Jessica really is "A" and they ask Alison to meet them, which she does. Alison tells them everything she knows and reveals that she crossed people off of her "A" list that night, including Spencer, who previously believed she either harmed Alison or the girl in the grave. After doing so, she returned home, where someone bashed her over the head with a rock, which her mother witnessed. The Liars question why Jessica didn't say anything and Alison reveals that it is because Jessica is the one who buried her alive. Alison says Jessica kept repeating "What have you done?!" over and over. Meanwhile, back in Rosewood, CeCe is apprehended by the police and reveals to a new detective named Holbrook that Alison is alive and she has proof. Back in New York where Alison's ally Noel Kahn brought the Liars, someone in a black hoodie attacks the girls and chases them to the roof, where Ezra shows up to help them, but ends up shot by the person, who escapes. Back in Rosewood, Jessica is murdered by an unknown assailant and buried by "A". 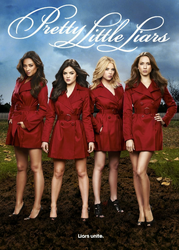 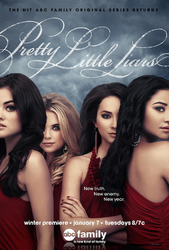 Spring Season poster
Add a photo to this gallery

Retrieved from "https://prettylittleliarss.fandom.com/wiki/Season_Four?oldid=21535"
Community content is available under CC-BY-SA unless otherwise noted.