Season Five finds the Liars in the moments following the shocking acts and revelations of the epic Season Four finale. While Aria, Emily, Hanna and Spencer that both Alison and Ezra are alive and safely back home, the discovery of two new corpses brings more questions to the surface - plus terrifying threats from "A." Is Alison really "A"? Or is "A" pretending to be Alison? With a surprising confession that tears five friends apart, the game is far from over. In fact, a new one is just beginning... one where surviving senior year might be the PLLs' toughest challenge yet! Get ready for 25 hot-button episodes filled with twists, thrills and emotional intrigue with Rosewood's most buzzed-about buds. 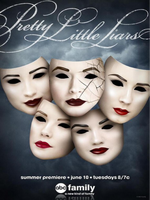 Add a photo to this gallery

Retrieved from "https://prettylittleliarss.fandom.com/wiki/Season_Five?oldid=18268"
Community content is available under CC-BY-SA unless otherwise noted.