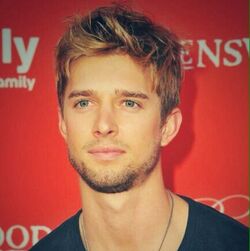 Drew Van Acker is an American actor and model. In Pretty Little Liars he portrays Jason DiLaurentis since Season 2 until present.

Drew Van Acker was born in Philadelphia on 2nd April 1986, he is 29 years old. He moved around a lot as a child before settling in Medford, New Jersey at the age of 10. He began acting in high school drama classes, he also played on his school's soccer team and lacrosse team. His soccer playing lead him to receive a soccer scholarship to Towson University, in Maryland. While attending Towson, Van Acker took a number of theater courses so he could re-focus on acting. He then made the decision to move to New York City, but when that did not work for his acting career he moved to Los Angeles.

Van Acker's acting credits include Castle and ABC Family's Greek as well co-starring in the WB.com webisode series The Lake.

In 2010, Van Acker began starring as Ian Archer in the Cartoon Network live-action series Tower Prep. In June 2011, it was announced he had joined the cast of Pretty Little Liars for the second season to replace Parker Bagley who played Jason DiLaurentis during the first season.

In 2013, he was cast on Lifetime's show Devious Maids as Remi Delatour, a main character for season 1-2 and for season 3 on a recurring capacity.

Retrieved from "https://prettylittleliarss.fandom.com/wiki/Drew_Van_Acker?oldid=23889"
Community content is available under CC-BY-SA unless otherwise noted.